On Thomas Hardy's "The Convergence of the Twain" 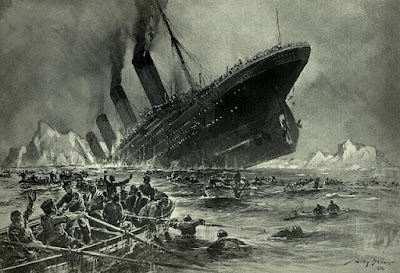 It does seem that all the people who were paying attention to the production of the Titanic really were excited about the ship as a superb achievement of engineering.  The "unsinkable" Titanic was surely a gilded, bright exemplar - even an idol - of man's ability to overcome the forces of nature, and to luxuriously dote upon himself.  So it was, that the sinking had a jarring impact on the minds and spirits of people.  Hardy publishes his own reaction to the event in this poem.

Hardy is known to have been an agnostic.  He was a modern man who did not believe in a personal God behind the material universe.  However, he uses personal terms as he couches his reference to a guiding principle - of which he seems certain - operating behind the convergence of the ship and the iceberg.  He may have not believed in a Person operating behind the shadowy scenes, but whatever blind fate was in operation he does personify it.  Why?  We could ask, why had anyone done such a thing before, because it is not an unusual way of depicting what we call "Fate."

What I cannot help but think is that the enormous irony of the event so impressed the public mind intuitively - as it does our own - that some kind of personal, or personalizing element was thought to be behind it; it at least would have felt that way or crossed their mind.  The event is so staggering, and the irony so patent, that the imagination still cannot help but make allusion to some morally intelligent involvement.  It seems a purposeful humbling of British hubris and vainglory, indeed making such glory vain.  In other words, it is just the kind of thing we think of God doing: judging human pride, and doing it in such a way that the means used add a commentary on it, bringing into full relief the foolishness of that pride.

Glaciers are always forming, always there.  They are majestic to view, but in a sense they are just as mundane as grass.  Sinking the ship was "no big deal" as far as icebergs go; it was done with a sigh and a "ho hum" of Nature.  I'm sure the glacier was insignificantly altered by the collision.  It just went on existing according to its nature.  Glaciers have no capacity to have any opinion at all about ships and the pride that builds them; thus the commentary.

I write the above to say that the human soul - including Hardy's - may want such events to be Fate, some manifestation of a Teutonic Wyrd, but why use personification to express this unless our thought cannot separate a guiding of human affairs from a mind of some kind.  To deny that there is anything personal involved is to invoke "chance." But there are times when events seem to forbid mere chance.  If it were a case of mere chance, there would certainly be nothing going on at all, and that will not do in such an instance.  No - even while trying to reason away the activity of a moral mind behind such events, our creative selves are compelled to personify our description of its activity.  There is something compelling our psyche, as it evidences in our language, to admit to more than what we may really want to admit.

Surely Hardy's "Immanent Will" and "Spinner of the Years" that speaks, these personal expressions, are indicative of our basic "instinct" (I use that word with caveat, of course) that we do inhabit a personal universe and the reason this convergence seems to have been a planned judgment of human vainglory by a personal Will is because it was.  Our imagination is seeing the event truly.  If we want to remain agnostic, we have to talk ourselves out of what our imagination depicts to us as true.

Whether Hardy wanted it to be so or not, the poem is filled with a watching and weighing Presence, an Immanence that determines that pride will come before a fall, or, if at sea, a sinking.  And it is wisdom to fear this Spinner and humble ourselves before him.

Luke 13:4 Or those eighteen, upon whom the tower in Siloam fell, and slew them, think ye that they were sinners above all men that dwelt in Jerusalem?  5 I tell you, Nay: but, except ye repent, ye shall all likewise perish.

Popular posts from this blog

George MacDonald on the Source of our Vocabulary

August 16, 2022
All words, then, belonging to the inner world of the mind, are of the imagination, are originally poetic words. The better, however, any such  word is fitted for the needs of humanity, the sooner it loses its poetic aspect by commonness of use. It ceases to be heard as a symbol, and appears only as a sign. Thus thousands of words which were originally poetic words owing their existence to the imagination, lose their vitality, and harden into mummies of prose. Not merely in literature does poetry come first, and prose afterwards, but poetry is the source of all the language that belongs to the inner world, whether it be of passion or of metaphysics, of psychology or of aspiration. No poetry comes by the elevation of prose; but the half of prose comes by the "massing into the common clay" of thousands of winged words, whence, like the lovely shells of by-gone ages, one is occasionally disinterred by some lover of speech, and held up to the light to show the play of colour in it
Post a Comment
Read more

October 31, 2021
Today is Oct 31, celebrated by Protestants as Reformation Day.  It is the anniversary of the day that Martin Luther posted his 95 theses on the door of Wittenburg Church.  That event is said to be the start of the Protestant Reformation.  Luther, however, was not trying to start a movement in the Church.  He did not intend for his action to lead to the events that followed.  He was actually following a common practice.  If a professor at the university where he taught had a subject he wanted debated, he would go and post a set of theses on the subject for debate.  It's just that by that time, there was a lot debate throughout Germany going on about the subjects he covered, and there was the printing press.  Someone removed his 95 these, printed them, and one thing lead to another. The Reformation was, of course, a very complicated event that spread over many years.  The result was a split in Western Christendom between the Roman Catholics and those called Protestants, of which ther
Post a Comment
Read more

August 30, 2022
Here's the first part of my conversation with Daniel Roberts of Solomon's Corner on Lewis's "Space" Trilogy.  Enjoy! You'll have to click on "Read More" to get the link to work; I don't know why!
Post a Comment
Read more